What is the difference between vermiculite and perlite?

Vermiculite and perlite are becoming increasingly popular in horticulture. Sowing, cutting and propagation companies are increasingly adding these substances to (potted) compost to ensure a better, more aerated structure. But what is the difference between vermiculite and perlite? Vermiculite will flake off like a harmonica when heated, resulting in very light particles that have great water retention and moisture retention capacity. Vermiculite flakes like a harmonica, while perlite expands when heated into porous, breathable and light-weight particles, an inorganic rock. Our experts will explain their differences in detail.

Vermiculite is a mineral that flakes (expands) like a harmonica when heated. This produces a very light particle with a great capacity to retain water and moisture. Due to this property, vermiculite is a popular choice as a substrate (additive) in the sowing, cutting and propagation business in the horticultural sector. This water retention and moisturizing capacity ensures, on the one hand, the retention of irrigation water, thus significantly reducing the loss of nutrients during the process, and on the other hand, ensures that the soil structure remains aired and oxygenated, so plants can root easily. In addition, vermiculite is often used as a mulch layer to germinate seeds or as a propagation medium for bulbs. That is vermiculite, but what is the difference between vermiculite and perlite.

Vermiculite 2 : 0 - 3 mm This is used to cover flower seeds to promote seed germination.

Vermiculite 3 : 0 - 5 mm This is used for covering vegetable seeds and for mixing potting compost.

Vermiculite 4 : 0 - 10 mm This is used for spreading bulbs during packing. 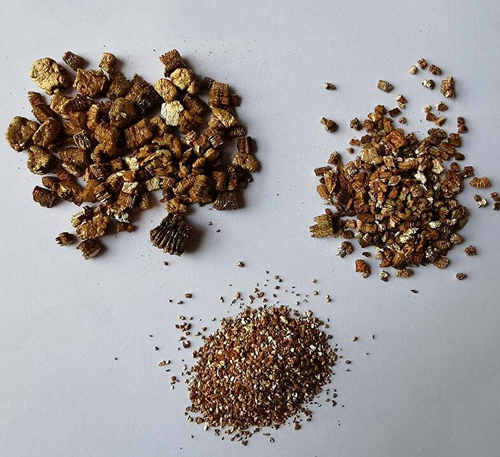 Perlite is an inorganic rock that expands when heated into porous, breathable and light weight particles. It is widely used as an additive for potting compost, cutting soil, sowing soil and plugs. As an additive to potting compost, perlite provides a lighter substrate and improved drainage and is therefore often used in combination with plants that require less moist soil, such as pint-sized plants. Perlite is also available in different particle sizes.

Perlite 2 : 0 - 3.0 mm is used for sowing and cutting soil, purely as a substrate and, in some cases, as a reflector for carnations and balsams.

Perlite 3 : 0 - 6.5 mm is used for mixing with potting compost to obtain a more aerated structure. 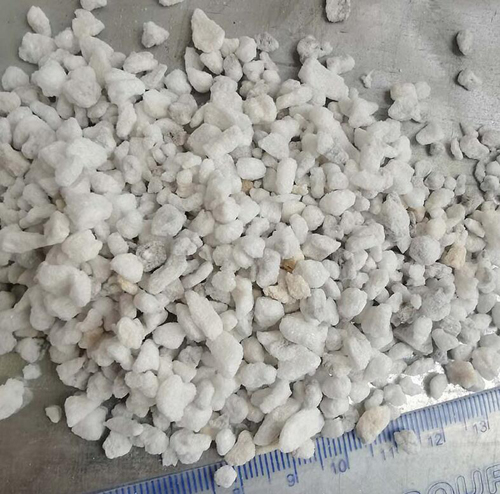 Vermiculite vs. perlite: the differences

I used to confuse them for a long time. However, they differ not only in appearance, but also in the way they are used. Use vermiculite instead of perlite and your herbs will suffer. Let's dive in!

1. Origin: from magma to clay

Vermiculite is a clay-based mineral (clay is a very fine and smooth medium that is common in soil, more on that here) formed underground and mined mainly in Russia and Africa. This mineral, to become the vermiculite you buy, is heated in an industrial furnace to release the water in it.

When this happens, the mineral bursts like popcorn as the water turns into a (much larger) gas and leaves the mineral. This creates empty pockets inside the material, making it very light. When it cools down it will hold a vermiculite shape.

Perlite, on the other hand, is a specific type of solidified magma (high silica content), also known as volcanic glass. This raw material is transformed by heating it at temperatures in excess of 1500F (815C) into the perlite you find in gardening stores. This, like vermiculite, causes the (relatively high) water content in this rock to evaporate, leaving cavities within the perlite as it evaporates. The material will also expand many times its original size and become very lightweight.

It is important to remember that they are pH neutral (so do not interfere with soil and nutrient uptake).

Perlite and vermiculite are relatively easy to distinguish from each other.

Perlite is bright white and has roughly rounded particles. It is very airy but not breathable (more on this later, it is very important for your herbs). Perlite is sold in different sizes: extra coarse, coarse, medium, fine and extra fine. The perlite you can find in stores has a very low density (it takes up a lot of space but is still light) of about 40-120 kg/m3 (for comparison, water is about 1000 kg/m3). Thus, perlite is lighter than water (because it tends to float on top, as will be described in detail later).

Vermiculite, on the other hand, appears yellow, towards golden brown particles. They have a cylindrical shape, are very ventilated and light in weight. It has cavities like perlite, but more importantly, it is porous (more about this in a specific section). It is sold in 3 different sizes: fine, medium and large (from 1 mm to 12 mm). It has a higher density than perlite (from 170 to 220 kg/m3, depending on the particle size). Nevertheless, vermiculite is still lighter than water, but it does not float due to its ability to retain water. This is important for your use of vermiculite.

As far as its composition is concerned, the main difference is the higher silica content in perlite and the higher magnesium content in vermiculite.

3. Water holding capacity and oxidation: ignore them and you will kill your herbs

Regarding the ability to retain water perlite will retain a small amount of water. This is because water will stick to the surface and its irregularities. This explains why perlite will float on the surface of water.

Vermiculite, however, absorbs water through its pores like a sponge. Because of its "clay" origin, this causes the vermiculite to swell up to four times and become cloudy (if too much water is poured in).

Understanding this different behavior will allow the herb to flourish or die out.

Oxidation is the ability of a material to allow oxygen to pass through.

Perlite is ideal for allowing air to reach the roots of herbs. However, this is not the case with vermiculite. In fact, when vermiculite is watered, it tends to collapse, making it less oxidizable than perlite because it becomes more dense.

I have to say that talking to several gardeners and reading around is a very diverse and sometimes contrasting opinion. However, one thing is clear. Perlite and vermiculite are not interchangeable because they have completely different water capacities.

When to use perlite

Perlite should be used to increase the aeration of potting soil. Therefore, you can use perlite for.

1. Old potting soil that has lost its aeration structure: Perhaps (as in my case), you have a bag of potting soil hanging around that you haven't been able to use for some time. In this case, you may notice that it has lost some of its original structure and aeration. As a rule of thumb, I recommend adding a third of the soil volume to the perlite

2. if you make your own potting soil: perlite is a good addition to add structure to the soil and increase drainage.

If, for any reason, your potting soil is very clayey (which I have never encountered), do not use perlite. Indeed, at first, using perlite to break up dense clay-heavy soils may sound like a good idea. However, after a while, the cracks created by the perlite will fill with water (remember that clay holds moisture well) and the perlite will be pushed right on top. Once on top, it can fly very fast (very light, like popcorn), making the interior, in particular, quite messy.

When to use vermiculite?

As strange as it sounds, I don't recommend using vermiculite for growing potted herbs (or plants in general). In fact, vermiculite makes watering extremely challenging. In fact, many of the claimed advantages of providing aeration are untenable. In fact, once wet, vermiculite loses its structure, collapses, and becomes muddy and dense. Furthermore, 30 years of professional gardeners agree with the same point.

So, why does vermiculite exist? Well, it has many uses outside of pot gardening and is great for those really thirsty plants that would otherwise require frequent watering. It is also used in hydroponic systems (where the soil is replaced by an inert medium, such as a mixture of perlite and vermiculite).

The only use I see for vermiculite for more traditional indoor gardening (hydroponics is a more recent method that I will experiment with and let you know about in the future) is for seedlings.

Previous:How to Make / Mix Perlite or Vermiculite with Cement for Pizza Oven Insulation
Next:Landscaping with Gravel