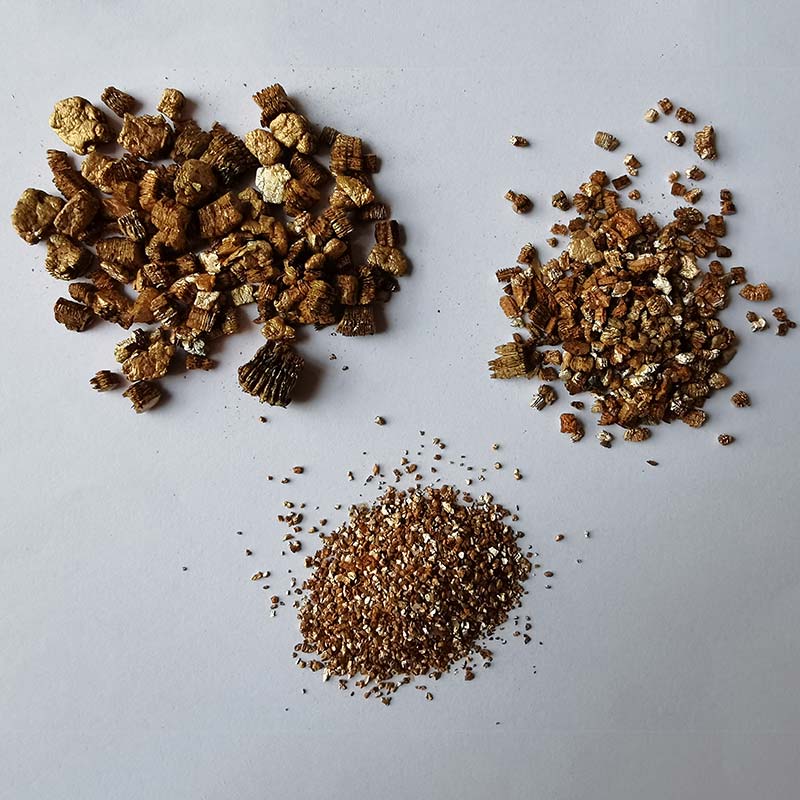 Vermiculite is a hydrous phyllosilicate mineral which undergoes significant expansion when heated. Exfoliation occurs when the mineral is heated sufficiently, and commercial furnaces can routinely produce this effect. Vermiculite forms by the weathering or hydrothermal alteration of biotite or phlogopite.

VERMICULITE is the name given to a group of hydrated laminar minerals which are aluminium-iron-magnesium silicates, resembling mica in appearance.Vermiculite is a hydrous phyllosilicate mineral which undergoes significant expansion (exfoliation) when heated. It is very lightweight and mixes easily with other mediums.

Crude vermiculite from the Palabora mine consists of golden/brown flakes which are carefully classified into five grades – each having a specified range of particle sizes.  The coarsest grade comprises particles ranging between 8mm and 2.8mm, while the finest grade consists of particles between 0.710mm and 0.250mm in size.

The loose bulk density of crude vermiculite varies with the grade, but is typically between 700 and 1100 kg/m3.

Due to its properties, Vermiculite has a remarkably wide range of applications. Low bulk density, low thermal conductivity, odor-free, chemical inertness, easy handle and fire resistance are the features that render Vermiculite a highly versatile and promising material.

Vermiculite can be used as high-temperature insulating refractory material. On top of that, when it is combined with other aggregates such as expanded shale, clay and slate produces refractory concretes and insulation materials.

Vermiculite has been successfully used as soil improver in Horticulture and Agriculture helping the plants to thrive.

It is an excellent carrier and extender for fertilizer and pesticides and works well as packing material for bulbs and tubers.

Because it is lightweight and thermally insulating, vermiculite is used in general building plasters and concrete products, alone or combined with other lightweight aggregates such as perlite. Special plasters, in which vermiculite is combined with binders like gypsum or portland cement, fillers or other additives, provide fire protection and soundproofing. As insulation, exfoliated vermiculite, sometimes treated with a water repellent, is used to fill pores and cavities in masonry construction and hollow blockwork to enhance acoustic properties, fire rating and insulation performance. Exfoliated vermiculite can also be used to produce refractory and insulation concretes and mortars, and to make high-temperature binders for construction materials, gaskets, specialty papers, textiles and vehicle brake linings. Finer grades of exfoliated vermiculite can be used to produce various shapes of insulation pellets, high-temperature insulation, as a primary component in cementitious coatings, and as a filler in inks, paints, plastics and other materials.

Vermiculite can absorb liquids such as fertilizers, herbicides and insecticides, which can then be transported as free-flowing solids. It is used in the fertilizer and pesticide markets because of its ability to act as a bulking agent, carrier and extender. In horticulture, exfoliated vermiculite improves soil aeration and moisture retention, and when mixed with peat or other composted materials, such as pine bark, vermiculite produces a good growing medium for plants. As a soil conditioner, exfoliated vermiculite improves aeration in clay-rich soils and water retention in sandy soils, while reducing the likelihood of compaction, cracking and crusting of the soil.

Brake linings: finer grades of exfoliated vermiculite are being used in brake linings primarily for the automotive market. The properties of vermiculite that make it an appropriate choice for use in brake linings include its thermal resistance, ease of addition to other raw materials to achieve a homogeneous mix, and its shape and surface characteristics.

Roof and floor screeds and insulating concretes: exfoliated vermiculite (typically the finer grades) can be added at site to Portland cement and other aggregates, and water to produce roof and floor concrete screeds which are lightweight and insulating. In many cases, vermiculite-based roof screeds are used in conjunction with other insulation materials, such as polystyrene board, to form a total roofing system.

Soilless growing medium: exfoliated vermiculite is combined with other materials such as peat or composted pine bark to produce soilless growing medium for the professional horticulturalist and for the home gardener. These mixes promote faster root growth and give quick anchorage to young roots. The mixture helps retain air, plant food, and moisture, releasing them as the plant requires them.

Exfoliated vermiculite is also used as a growing medium for hydroponics.

Seed germination: vermiculite, alone or mixed with soil or peat, is used to germinate seeds; very little watering is required. When vermiculite is used alone, seedlings should be fed with a weak fertilizer solution when the first true leaves appear. A tablespoon of soluble fertilizer per one imperial gallon (3.78:1) of water is the recommended mix.

Fireproofing products: Exfoliated vermiculite is one the ingredients in the manufacture of cementitious and gypsum-based spray-grade fireproofing material, generally used as Passive Fire Protection products on structural steel and concrete.

As a constituent of a coating: vermiculite dispersions are typically either chemically or physically very finely delaminated vermiculite in a fluid medium. These dispersions can be used to make vermiculite 'paper' sheets by pouring them onto a piece of smooth, low surface-energy plastic, and allowing to dry. The resulting sheet can then be peeled off the plastic.

As a packing material, valued for its high absorbency.

As a lightweight aggregate for plaster, proprietary concrete compounds, firestop mortar, and cementitious spray fireproofing: Exfoliated vermiculite is used in both hand and spray-applied general building plasters to improve coverage, ease of handling, adhesion to a wide variety of substrates, fire resistance, and resistance to chipping/cracking/shrinkage.

As an additive to fireproof wallboard.

As a component of the interior fill for firestop pillows, along with graphite.

As a carrier for dry handling and slow release of agricultural chemicals.

As a hot topping: both exfoliated and crude vermiculite have been used for hot topping in the steel industry. When poured onto molten metal, crude vermiculite exfoliates immediately and forms an insulating layer, allowing the material to be transported to the next production process without losing too much heat.

Used in in-ground swimming pools to provide a smooth pool base: Finer grades of exfoliated vermiculite plus Portland cement may be combined either on-site or in a factory premix to provide a base for swimming pool vinyl liners.

Used in AGA cookers as insulation.

Used in explosives storage as a blast mitigant.

Used as part of a substrate for cultivation of fungi.